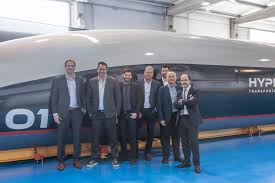 Hyperloop Transportation Technologies is a company that develops and implements a hyperloop transportation system. They are currently in the early stages of the design and development of their system.

This new technology aims to provide a safe and fast way to travel. The system uses a network of tubes that can be built underground or on land. It combines speed with flexibility and sustainability.

There are some inherent risks associated with the hyperloop. These include accidents and equipment malfunction. However, the risks are significantly less than those involved in building a high-speed rail line.

The Hyperloop concept was first introduced by Elon Musk in 2013. Musk claimed that the Hyperloop would be faster and safer than most current forms of transport. He said that a Hyperloop capsule could carry up to 40 passengers.

The Hyperloop would allow capsules to travel at supersonic speeds inside a vacuum tube. Air pressure is only 100 pascals, which is about one-sixth the atmosphere on Mars. In this low-pressure environment, friction is reduced and the system operates at minimal cost.

Hyperloop has been proposed for use across several continents, but it is still in the early stages of development. Although the hyperloop concept is still a vision, many people want to see it come to fruition.

HyperloopTT, an American company, has been working to perfect the Hyperloop idea. They have already amassed a large number of patents and trademarks. Their next full-scale system is planned to be in Europe. A 320-meter test track has been built in Toulouse, France.